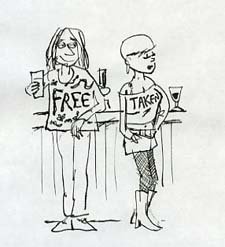 It’s about time people started to give some thought to the folk out there on the edge. The lost souls trapped in the warzone who are trying to find love and not step on a mine. Those brave folk who walk alone. It’s not easy being single. You don’t have another half to tell you when you’re going out, staying in or doing the grouting. You have to stay out all night drinking without having to go home early to do the weekly shop. You never get to watch X-Factor and pretend that you’re only watching it because your other half wants to… and occasionally you’ll have to go to a gig alone. For some people, this can be a problem. Sure usually there’s a friend to go with but sometimes those friends don’t share your musical taste. When that happens the choice is a stark one – go on your own or stay in and watch Coronation Street.

If you’re a musician it’s not a problem. It’s a well-known fact, stretching back to the days of Sodom and Gomorrah, that anyone walking into a pub or club carrying a guitar case is instantly more attractive. There was even the legend of a guy who carried a guitar case around bars just to attract members of the opposite sex. Something he did with great success until one of them opened up the case and realised that it was empty and the guy couldn’t tell a G-chord from a G-spot.

If you have no musical ability, you’ll have to join the maddening crowd. For those frail mortals too afraid of their own company to do this, help is at hand. Scientists in America have recently calculated several important factors than can help people, especially single men aged between twenty and forty-five, avoid the fear that comes from going to a gig alone. And obviously, when I say single men twenty to forty-five I mean that bunch of cica-thirtysomethings who wear black, were raised on the Smiths and have decided to have a Number Two cut because it looks cool and not to conceal their ever-increasing bald spot.

The first step is an obvious one. Don’t get to the gig too early. Never wait outside in the vague hope of seeing the band enter. You won’t. They’ll be in the back getting drunk/stoned/sleeping with groupies and you’ll only find yourself getting wet with a bunch of other people who could have stepped out of the local Gap shop. It’s far better to go on a mini-pub crawl. Try to keep it to a four-pub minimum and avoid such obvious single bloke haunts as the bandit and pinball machine. Drink shorts if you can handle them, that way if you start to feel uncomfortable you can down your drink and leg it. Before you run away though, take a look around the bar. Okay, so there maybe lots cute little couples who seem happy. Content yourself in the knowledge that their happiness won’t last. It might take a few years for the rot to set in but before too long they’ll soon be weighed down with kids, mortgages and marriage and consider each day an unending drudge of misery from which there’s no escape… and that’s if they’re lucky.

Obviously, try not to think about your own possible future – as a sad old loner living in a run down flat on the westside of nowhere scaring local pigeons with your smelly, shambolic existence. If you do start thinking about the future, it’s essential you get to the bar ASAP and keep drinking until the feelings of sadness and dread go away.

Once you get into the venue, it’s time to get serious. If you’ve timed it right, the support band will already be on stage. It’s important, nay vital, that you don’t go and watch them. Take a second out and look over the audience. The two attractive women dancing aren’t available. They’re only dancing and looking enthusiastic because it’s in the contract they signed when they started dating members of the band. The rest of the audience will be single blokes, standing a few yards apart with pints in hand, nodding their heads out of synch to the music while watching the bass player, who some will have decided they quite fancy on some level they’d rather not think about too much. Instead of watching the band, head to the bar and get another drink. This is all part of the process of killing time until the main act starts and, if you’re lucky, could kill a good ten minutes. The person behind the bar will pretend not to see you as they try to psyche you out. The only way around this is to wave a twenty quid note in the air, as though you’re going to buy a round of drinks for yourself and your (imaginary) friends. The twenty quid note often works but be careful you don’t get carried away and actually buy a round. This is not as unheard of as you may think. There have been cases of people buying a round of drinks and placing them on a table before starting to mumble to their imaginary friends. Scientists call this Syd Barrett Syndrome.

With your drink in hand it’s time to check out the turf. We’ve all seen the footage of a proud lion prowling across the desert, looking hard as nails. The truth is that lions aren’t that tough and only prowl because they’re on their own and hope no one’ll notice if they keep moving. This should be your plan. Start with three circuits of the venue. You’ll see lots of other single people hiding in the shadows, looking at the doors pretending to wait for someone (as if anyone’s fooled by that). This mini-trek serves a few purposes. Not only do you get to feel better by seeing all the people flying solo, you also get to suss out the best spots to stand. After a good prowl, you can nip to the toilet. The toilets are important. For an average gig you should allow yourself four toilet trips spread evenly over the night. Use these every time you feel people are starting to look out at you and giggle. While people won’t be laughing at you there will be points when you’re convinced they are and a quick toilet trip will help break the chain of thought. Be careful though as more than five visits count as cottaging.

Which brings us neatly to sex. You could allow yourself a couple more circuits around the venue and pretend to be looking for someone. While on your own, the other punters don’t know that and, with practice, a seasoned solo flyer will be able to pull it off. Again, it’s important not to overdo it or people will think you’ve been stood up. This is clearly untrue as you couldn’t get a date in the first place. Walking around will also give you a chance to check out the talent (male, female, Emo) and after a few more drinks you should be able to convince yourself that, if you could be bothered, you could pull anyone you wanted to. Try not to give yourself a reality check at this point as it’s an okay little fantasy to carry you through to the band starting. Of course you could always try talking to someone. It’s not against the law, (restraining orders aside) and you might even have an interesting conversation. Be careful you don’t end up lumbered with ‘The Fan’ though. You’ll have already seen him standing at the front of the queue at the start of the night (as you walked on to the local pub) and in the olden days he’d have tried to sell you a fanzine. That probably won’t happen anymore (unless you’re at a Marillion gig) but if you give him the chance he will tell you about the message board he created for the band. In detail. For hours. The Fan is easy to spot as he is always an overweight bearded male with greasy unwashed hair and an interesting body odour. A few seconds of The Fan is all most human beings can tolerate and the encounter will leave you feeling a lot better about yourself. Be warned, if you spend longer than a few minutes with the Fan, other people in the venue will think you’re his side-kick and the strange dank smell he carries around will contaminate your clothing and prevent a member of the opposite sex from ever talking to you.

Once the main act comes on, you’ll be fine. Stay at the back of the crowd, with easy access to the bar, and try to nod your head in time to the music. Once you’ve practised all these moves on at least five separate occasions, feel free to take them to the next level. Before the main act take your drink into the middle of the empty area in front of the stage, stand there and proudly announce, “I’m gigging alone. Want to make something of it?”

Who knows, maybe you’ll get lucky and someone will talk to you. Failing that you can always go home and watch Coronation Street.

Originally published in the Clap, Summer 2002. Thanks to Andy Dakin for the original commission and Glenn Dakin for the ace pics.