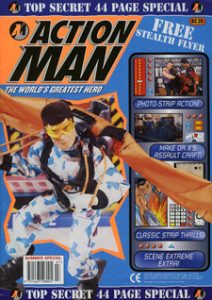 I took over editing Action Man from the second issue, working closely with artists such as John Ross and Andrew Wildman to give the property a unique comic and magazine identity. The series was accompanied by a series of specials leading off with a ‘live action’ photostrip of Action Man fighting his enemies Dr X and Gangrene.